W1F1SN1FF3R Ransomware is a malicious application that blocks the screen and demands to pay a ransom. The samples we discovered did not work properly, so it is possible the malware is currently inactive. Nonetheless, it might be spread later on, which is why we believe users should know about it. Of course, given the threat is probably unfinished, some of its functionality could change. Therefore, for those who may encounter it, we would recommend reading the article carefully so you could determine if the variant you received is the same or different. In case the malware gets updated it would be smarter to get rid of it with a reliable security tool of your preference. As for this particular W1F1SN1FF3R Ransomware variant, you should be able to eliminate it manually by following the instructions located below this text.

If W1F1SN1FF3R Ransomware is being spread it could travel with malicious email attachments. A lot of similar threats are spread through infected attachments, which is why users should be extremely cautious when they receive files from unknown senders, data they were not expecting, and so on. Some hackers come up with titles that would make the targeted victim curious for infected attachments or send them along with a text supposed to convince them to open it immediately. Thus, what you should never do after receiving a suspicious attachment is rush to open it. Instead, take a look at the sender’s line and check if the address is legitimate. Search for grammar mistakes or other suspicious details in the message that could signal the letter is fake. Last, but not the least, scan the attachment with a reliable antimalware tool that could determine if it is malicious or not.

Once the malware’s installer is launched, it should kill the Task Manager. Truth to be told, all W1F1SN1FF3R Ransomware attempts to close it were in vain, so our researchers had to kill Task Manager themselves to test the threat properly. After doing so, the malicious application locked the screen by replacing it with a blue window saying “OMG! W1F1SN1FF3R ATTACK!!!” The infection’s message also tried to convince us the malware deleted all files located on the computer, but it appeared to be not true. As always in exchange for restoring victim’s data, the malicious application’s developers asked to pay a ransom. The sum is somewhat significant as the ransom note claim’s the user should transfer a Bitcoin into the provided account. Currently, a single Bitcoin is more than 3 thousand US dollars. A ridiculously huge sum is another reason why we doubt W1F1SN1FF3R Ransomware is being spread yet.

After inspecting the malicious application’s code, our specialists found out the code that unlocks the screen is four zeros (0000). After entering it, the threat should show a couple of windows probably as a joke. Most importantly, entering it unlocks the screen and after doing so, you should be able to eliminate W1F1SN1FF3R Ransomware either by following the removal instructions located below or with a reliable security tool of your preferences. If you have any other questions about the threat or its deletion you could leave us a comment below this article.

Get rid of W1F1SN1FF3R Ransomware

Download Remover for W1F1SN1FF3R Ransomware *
*SpyHunter scanner, published on this site, is intended to be used only as a detection tool. To use the removal functionality, you will need to purchase the full version of SpyHunter. 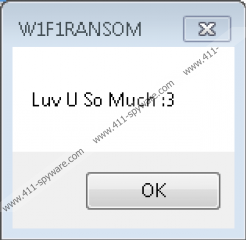