There are certain potential system security threats that are common to particular regions. For example, Volaro is an adware application that mostly affects users' computers in the Middle East. It is an application that displays annoying pop-ups and connects to the Internet without your permission. We do not consider adware programs malicious infections, but Volaro is extremely suspicious because it is known to get distributed with Trojans. Hence, if you happen to have this application on your computer, you should remove Volaro as soon as possible because it could lead to serious computer security problems.

One of the most annoying things about Volaro is that it cannot be uninstalled manually. It does come with an entry on the list of installed programs, but the removal via Control Panel does not help to remove the program’s files or its applications. If you want to remove Volaro, you need to delete its folders from the Program Files directory. The folders are called Volaro and VonteeraAddon. What is more, this adware application adds extension to your browser. It might also be called Vonteera or Volaro. The extension affects all main browsers, including Internet Explorer, Mozilla Firefox, and Google Chrome, thus increasing the possibility of infection.

The reason Volaro extension may be called Vonteera is that the application makes use of the Vonteera adware platform to display commercial ads. In fact, our security specialists say that there are many different Volaro variations, and some of them may come with some particularly disturbing features. For example, we know for sure that some of the versions of this adware hijack your homepage to arabyonline.com, so, in a sense, in some cases Volaro could be treated as a browser hijacker as well.

Nevertheless, your biggest problems at hand are the Volaro ads and the program’s distribution method. The advertisements may display potentially corrupted content, so it is not a good idea to click those ads whenever they appear on your browser’s window. Also, if Volaro arrived onto your computer with a Trojan (it is very unlikely that you downloaded it at volarotech.com), then it is clear that you have a serious situation and you need to do something about it immediately.

We provide instructions below on how to delete Volaro extension from your browser manually, but, if you really are infected with malware, that will not be enough to safeguard your PC from harm. You need to invest in a legitimate computer security application that will help you scan the system and remove all the dangerous infections automatically. Do not wait until it is too late. The Volaro adware application is definitely just the tip of the iceberg!

How to remove Volaro extension

Download Remover for Volaro *
*SpyHunter scanner, published on this site, is intended to be used only as a detection tool. To use the removal functionality, you will need to purchase the full version of SpyHunter. 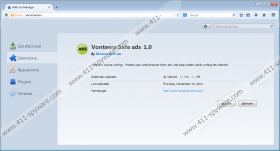 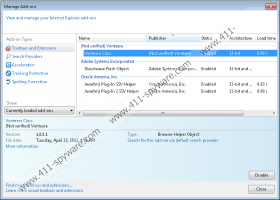 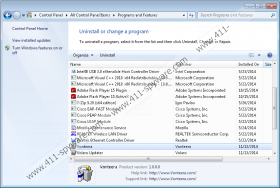