SystemBytes Win 7 2015 is a deceptive program that looks like a security program and imitates operations typical of anti-virus programs. The removal of this program is a must; however, not all computer users are aware of the fact that their computers can get infected by a program whose interface is similar to the interfaces of legitimate security programs. SystemBytes Win 7 2015 is a scam, and it usually gets onto the computer without the user’s permission. If you do not remember installing this program, it suggests that you keep the system unprotected and tend to browse unsecured websites.

Upon installation, SystemBytes Win 7 2015, as well as the other program that belong to the Braviax family, disables executable files so that you cannot access the Internet, launch security programs, and disable malicious processes using the Windows Task Manager. Additionally, the infection shows a fake notification once you try to launch a security program or any other application. According to the pop-up alert, the program you want to use is infected, which is not true. Once you remove SystemBytes Win 7 2015 from the computer, you can use the PC as usual, so do not believe those deceptive notifications.

Most important, SystemBytes Win 7 2015 attempts to make you think that you operating system is at risk by imitating system scans. The truth is that this program is not capable of analyzing the system, which means that even its so-called full version cannot shield you against malware and spyware threats.

Download Remover for SystemBytes Win 7 2015 *
*SpyHunter scanner, published on this site, is intended to be used only as a detection tool. To use the removal functionality, you will need to purchase the full version of SpyHunter. 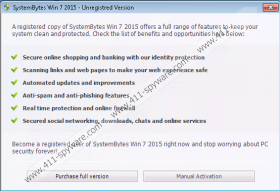 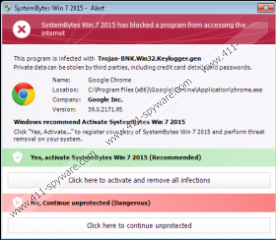 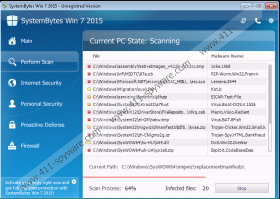