If your PC is getting annoying popup messages from System Fix stating that the system is being overrun with crippling errors then you have serious cause for concern. System Fix is a malicious rogue defragmenter only out to rip you off. Deriving from the same despicable family of rogues as FakeHDD, it will not rest until it succeeds in fleecing its victim out of his money. This rogue is not able to detect or fix any type of error and is nothing more than a malicious infection in itself.

System Fix pretends to scan the System Drive, Ram Memory and System Registry and My Computer sections of the PC. It will report errors on all these sections of the system and will offer to fix it only once the user purchases System Fix. This rogue enters the system surreptitiously using fake online scanners and websites that employ drive-by download tactics.

The fake scan it generates will shortly be followed by fake system notifications informing the user of the same errors. Some of the fake alerts to be on the lookout for include the following:

Windows detected a hard disk problem
a potential disk failure may cause loss of files, applications and documents stored on the hard disk. Please try not to use this computer until the hard disk is fixed or replaced.

Windows detected a hard disk problem
a potential disk failure may cause loss of files, applications and documents store on the hard disk. It's highly recommended to scan and solve HDD problems before continue using this PC.

Hard Drive Failure
The system has detected a problem with one or more installed IDE / SATA hard disks. It is recommended that you restart the system.

Symptoms reportedly associated with the System Fix infection include users being unable to launch applications on the infected PC. Users have also complained about severe poor system performance and increased erratic system behavior.

System Fix has also been known to generate and delete random Desktop items, and to hide certain system folders and its contents from users.

In order to limit the damage this rogue will cause to your PC and to regain control of your system destroy System Fix immediately using a legitimate security tool. This will obliterate System Fix and protect your system against similar attacks in future.

Download Remover for System Fix *
*SpyHunter scanner, published on this site, is intended to be used only as a detection tool. To use the removal functionality, you will need to purchase the full version of SpyHunter. 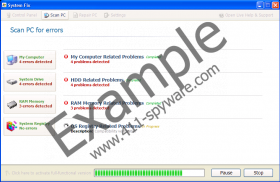