If you have recently been annoyed by advertisements labeled "Ads by Swift Record" or "Provided by Swift Record," chances are that you have been infected with Swift Record. It is a typical adware application that you should remove, because it is unreliable in nature. It displays commercial advertisements that without exception are supplied by third parties. This fact should be very worrying for all, average and advanced computer users alike. The adware might promote misleading or fake ads that could infect your computer with malware that will be very difficult to remove. In short, the adware is an infection that has no reason to be on your computer.

Its advertisements usually come in pop-ups, coupons, banners, in-text ads, and so on. The adware might display ads that claim that you need to install a certain Media Player to play some sort of video. Nevertheless, it might display all kinds of fake advertisements, which for example, might claim that you must update Java or Adobe products. Apart from that, it displays typical commercial ads that supposedly offer very good deals you would want to miss out on. We are obliged to inform you that you shouldn’t trust Swift Record, and remove it as soon as possible, because fake advertisements might contain a hidden infection that will severely jeopardize your system’s security.

It would be better not to install malicious applications such as Swift Record, but that is rarely possible as most adware creeps in when we are paying little attention to what we are installing. Of course we are referring to software bundles with which Swift Record come packaged with. It must be mentioned that the program cannot be downloaded from its website called Theswiftrecord.com. Therefore, the only way you can get infected with the malicious app is via freeware distribution websites.

All in all, Swift Record is definitely an undesirable application as it does not perform any useful functions you might need. It only displays commercial ads that could be a source of infection. It is difficult to determine what specific infections might be distributed via this app, but the sheer possibility of getting infected with malware should be enough to remove it.

How to remove Swift Record from Windows

Download Remover for Swift Record *
*SpyHunter scanner, published on this site, is intended to be used only as a detection tool. To use the removal functionality, you will need to purchase the full version of SpyHunter. 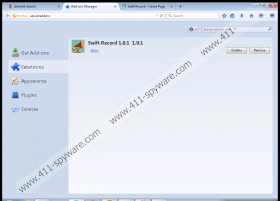 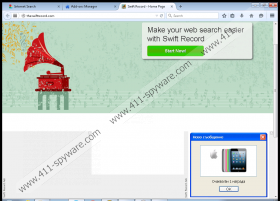