If you enjoy streaming music and videos, you might want to have a tool that helps you find the most relevant streaming sites. StreamSearchClub might sound like one of those apps that can improve your media streaming experience. However, we would like to point out that this application is also a potentially unwanted program that could enter your system accidentally. Therefore, if you don’t remember adding this extension to your browser, but it’s there, you might want to remove StreamSearchClub today. Scroll down to the bottom of this entry for the manual removal instructions and be done with it.

In some cases, users might also think that StreamSearchClub is a browser hijacker because it modifies browser’s settings. If users do not plan to have this extension and it seemingly pops out of nowhere, it is easy to think that it is a malicious intruder. However, StreamSearchClub isn’t that sophisticated, and it wouldn’t be able to enter your system unless you allow it to. Even if you say that you don’t remember adding this extension, the truth is that you did. So, let’s see how that can happen. Why would anyone add a program they don’t want?

StreamSearchClub has several distribution sources. It has an official website at streamsearchclub.com, and it can also be found at the Chrome Web Store. Seeing how the official sources are out in the open, it is clear that the application doesn’t hide its presence. What’s more, the app’s page on the Chrome Web Store says that there are over 20,000 users who have added StreamSearchClub to their browser. Hence, it would seem that the app is rather popular, although we haven’t found any reviews for it on the page. Nevertheless, the overview for this app says that “this product lets you browse the web and get easy access to search, images, videos and news.”

So, it might seem that there is nothing suspicious about the app, but how can it reach easers who don’t want it? Well, that’s because StreamSearchClub could also employ third-party distributors, where it spreads through pop-ups and redirects. Let’s say, you’re visiting some page that generally has a lot of ads. Also, sometimes clicking anywhere on the site launches a pop-up. For the most part, it should be possible to close those pop-up without too much difficulty, but some users might be confused about the content they see, and they could accidentally click the Add to browser button that comes with the pop-up.

If that happens, StreamSearchClub enters the system and it changes the default search engine to feed.streamsearchclub.com. This, supposedly, should help you find the best streaming sites, but if you were to run a search query, you would soon see that you get redirected to a modified Yahoo! Search page. Like most of the other potentially unwanted programs, StreamSearchClub employs a popular and well-known search engine to deliver you the search results. The results are often reliable and relevant, but there could also be sponsored links in between, embedded there by the people who use the advertising space offered by this extension.

Third-party advertisements could be embedded with corrupted outgoing links, and it would lead to a number of security issues. It’s not StreamSearchClub’s fault, but the extension might as well be exploited by these shady third parties. Hence, if you do not want to have this app or if you didn’t even plan to add it to your browser, you might want to remove StreamSearchClub right now. After manual removal, you can also scan your computer with a security tool of your choice to see whether there are more unwanted programs to remove.

Download Remover for StreamSearchClub *
*SpyHunter scanner, published on this site, is intended to be used only as a detection tool. To use the removal functionality, you will need to purchase the full version of SpyHunter. 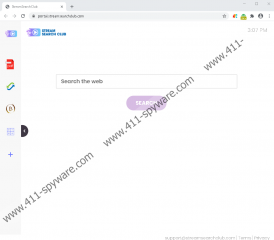