Although seemingly legitimate, users are warned against trusting Security Sphere 2012. This rogue antispyware application was designed not to be of any benefit to a PC, but instead to act as a vehicle with which unscrupulous cyber criminals rip off honest hardworking consumers. Although Security Sphere 2012 may appear genuine, it does not change the fact that it is incapable of protecting your PC against any type of threat or infection.

Download Remover for Security Sphere 2012 *
*SpyHunter scanner, published on this site, is intended to be used only as a detection tool. To use the removal functionality, you will need to purchase the full version of SpyHunter. 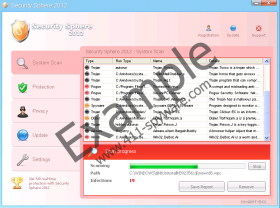