Security Bytes 2015 exhibits numerous alarming features, which you will notices as soon as this malicious program is up and running on your operating system. First of all your system will be scaned for alleged virtual security threats. Keep in mind that all the presented results after the scan are fake and should not be trusted under any circumstances, as they are used as a scare tactic in order to fool you into buying an utterly worthless and fake anti-spyware application.

You will also notice that most of the applications on your PC such as instant messaging programs, web browsers, media players and quite a few others are not functioning whatsoever. This is so because Security Bytes 2015 blocks .exe, as it is another scare tactic employed by cyber crooks. If you try to open any of the mentioned applications you will be shown a message telling you that it is unsafe to use the application. Do not get tricked by this as well, because, in reality, all your applications are actually safe to use. Furthermore, such important application like the Task Manager and the Windows Registry Editor will be blocked as well, so the removal process could turn out to be quite tricky. Do not worry as we provide a comprehensive removal guide that is easy to use.

How to remove Security Bytes 2015

Remove Security Bytes 2015 from Windows XP
Download Remover for Security Bytes 2015 *
*SpyHunter scanner, published on this site, is intended to be used only as a detection tool. To use the removal functionality, you will need to purchase the full version of SpyHunter. 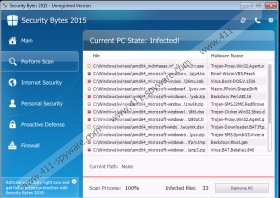