SalesChecker is a newly crafted adware application that has been circulating around the web lately. Reports show that quite a few users get their operating systems infected by this invasive program. Just like many analogue adware applications, SalesChecker is marketed in a shady way, to say the least. It should provide deals with the best prices and discount coupons while you are shopping online, and that should save your time and money. It sounds tempting, especially if you are a frequent online shopper. Sadly, it is all a trick to lure you into installing a useless and annoying application. Your browser will be flooded with worthless adverts, causing extreme annoyance and possible exposure to other malicious applications. Remove SalesChecker without hesitation as virtual security should be utmost priority

Most applications such as SalesChecker are spread in dubious ways. Probably the most popular way to distribute adware programs is via bundled freeware. InstallRex, Vittalia, and Amonetize installers are infamous for distributing dubious programs, and SalesChecker is one of them. Do not download anything from dubious third-party download websites because such websites usually promote the mentioned installers. Your first choice for software downloads should be official websites as they do not tend to provide setup files filled with numerous unknown applications. Moreover it is advised to use a reliable antimalware tool for complete security of your system; also a professional malware detection and removal tool can identify and terminate any virtual threat immediately.

SalesChecker is based on the JustPlugIt engine and works in virtually the same way as other applications (DealsFactor, CouponAddon, Les2Pay, LuckyCoupon, ExtraCoupon and many others) based on this engine. As soon as SalesChecker enters your operating system it will install browser extensions. SalesChecker is compatible with Mozilla Firefox, Internet Explorer, and Google Chrome. The extensions are used to display third-party commercial adverts within your browser. Unfortunately, that is not the worst feature of SalesChecker.

The privacy policy document that you can find on the official website states that the application will collect certain personally identifiable information. This information may include, but is not limited to, your name, email address, postal address, and phone number. It is impossible to determine what other personal information about you is collected by SalesChecker. The worst thing here is that the gathered information is shared with dubious third-party associates of SalesChecker. This kind of information in the hands of malware distributors could lead to extremely detrimental consequences. It goes without saying that removal of SalesChecker is a must if you wish to maintain a clean and secure system.

The removal of SalesChecker is paramount as the ad-supported application is related to unreliable third parties. As long as SalesChecker is present on your PC, you are at constant risk of infecting your system with some other internet-based infection. Fortunately, the removal process is rater simple as SalesChecker can be deleted via Control Panel. Even though the malicious and annoying activities stopped after manual removal, we strongly advise you to analyze your system for the potential leftover of SalesChecker. If any traces are present, remove them immediately.

How to remove SalesChecker from your operating system

Download Remover for SalesChecker *
*SpyHunter scanner, published on this site, is intended to be used only as a detection tool. To use the removal functionality, you will need to purchase the full version of SpyHunter. 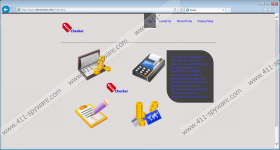 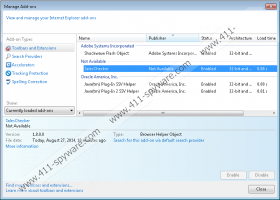 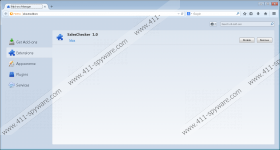