RealDeal is an adware program that belongs to the adware family that includes dubious applications like tictaccoupons, ReGUlarDeaLs, youububeadblocker, save onn, cool sale coupon, etc. All theses adware programs just like RealDeal must be removed if you wish to prevent any other infections. Most often frequent online users are infected by various adware applications as they are manipulated into thinking that RealDeal or any similar application will help them save money by presenting various deals. In fact, all adware applications are capable of is disrupting web surfing – it will become an annoying and frustrating process to say the least. The best decision that you can make regarding RealDeal is to remove it immediately.

In most cases, any adware program is distributed via bundled software and RealDeal is not an exception. It has been noticed that most often RealDeal is distributed via InstallRex installers. These installers are usually prompted at questionable third-party hosting websites. They are in most cases filled with potentially unwanted or harmful software that should be avoided at all times, and if, unfortunately, installed – removed. In order to reduce the risk of downloading dubious installer, you should download your software from official websites. Furthermore, installing and running a reliable antimalware tool should be on your priority list if you want to maintain a secure and clean system. A professional antimalware tool can identify and remove dubious installers instantly.

Once RealDeal gets onto your operating system it adds extensions to all the popular browsers on the market (Internet Explorer, Google Chrome, and Mozilla Firefox). The names of these extensions can be randomized, users report coming across names like realdeal, RRealDeaL, ReAlDeall, etc. These extensions are likely used in order to present you with numerous commercial adverts while you browse the web. It was noticed that clicking on an advert provided by RealDeal often redirects users to websites with even more useless adverts and sometimes to potentially malicious websites that could sometimes contain further links that promote malware in general. After a thorough removal of RealDeal, these annoying and sometimes potentially dangerous activities are completely gone.

You should remove RealDeal as soon as possible. We provide a comprehensive removal guide. If you follow it carefully no problems should be encountered. The annoying thing about RealDeal is that even after you remove it via Control Panel you will still have to remove browser extensions manually. Furthermore, some traces of the infections might remain, and they should be removed as well if you wish to keep your system clean. Often an average user cannot identify files, folder or registry entries of the infection. That is why it is advised to use a reliable antimalware tool for complete removal.

How to remove RealDeal from your PC

Remove from Windows 7 and Windows Vista

Delete RealDeal from your browsers

Download Remover for RealDeal *
*SpyHunter scanner, published on this site, is intended to be used only as a detection tool. To use the removal functionality, you will need to purchase the full version of SpyHunter. 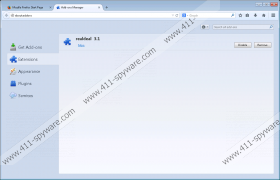 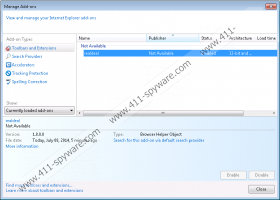