Rango Win 8 Antivirus 2014 employs certain scare tactics to prompt you to purchase the full version. For example, it disables all executable files so that you cannot browse the Internet, launch security programs, or perform other actions. Moreover, when you try to launch the program, the infection displays a fake error claiming that the program is infected. Below you will find an example of how the deceptive warning may look like:

This program is infected with Trojan-BNK.Win32.Keylogger.gen.

Private data can be stolen by third parties, including credit card details and passwords.

According to the purchase page of the malicious programs, there are three types of license, and their prices differ accordingly (from $59.95 to $99.95).We advise you against investing in this fake program because it would a complete waste of money.

Rango Win 8 Antivirus 2014 may seem to be a reputable program because its logo resembles the logo of Microsoft. There are a lot of cyber criminals that seek to deceive unsuspecting users through the use of the credentials of well-known companies. Some malicious websites promoting unreliable programs claim that the products are endorsed by Microsoft, which is not necessary true.

How to remove Rango Win 8 Antivirus 2014

Download Remover for Rango Win 8 Antivirus 2014 *
*SpyHunter scanner, published on this site, is intended to be used only as a detection tool. To use the removal functionality, you will need to purchase the full version of SpyHunter. 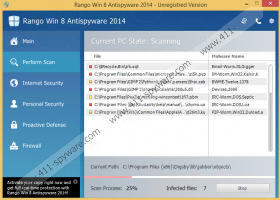 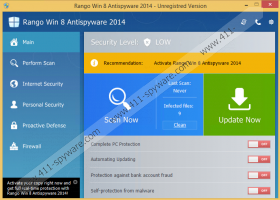 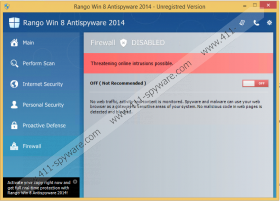