In today’s increasingly unsafe and hostile online world, it has become a necessity to invest in powerful security software. Unfortunately there are many cyber criminals taking advantage of the fear of consumers by developing and marketing rogue security applications like PC Optimizer Pro. This rogue, which derives from the same family of rogueware as PrivacyGuard 2010 was created to act as a vehicle with which criminals can rip consumers off. It does not have any of the professed abilities it claims to, and certainly cannot protect your PC against any type of attack or threat, as it is a threat in itself.

If you are wondering how PC Optimizer Pro manages to gain access to your PC it uses various techniques and methods to surreptitiously enter the system. These include bogus online malware scanners infected with the PC Optimizer Pro infection as well as seditious browser hijackers which incorporate drive-by download tactics. Of late it has also been reported that PC Optimizer Pro bundles its Trojans and malware together with other third party security updates and downloads.

It will also state that the system is slowed down by all these infections and that there will be internet connection loss due to the many fake threats it puts the blame on. It will also go on to spam the user with various fake security warnings, stating that the system is under attack. These should also be disregarded, and enjoy no attention. Some of the most popular fake alerts to be on the lookout for reads as follows:

Other symptoms reported from the PC Optimizer Pro infection include extremely poor system performance, the random generating and deleting of Desktop items and increased erratic system behavior. Users have also reported that certain system folders’ contents are hidden, as well as the inability to launch applications and programs on the infected PC.

Limit the damage this rogue will be able to cause your PC by investing in a powerful security tool which will permanently destroy PC Optimizer Pro and restore your system’s security and privacy.

Download Remover for PC Optimizer Pro *
*SpyHunter scanner, published on this site, is intended to be used only as a detection tool. To use the removal functionality, you will need to purchase the full version of SpyHunter. 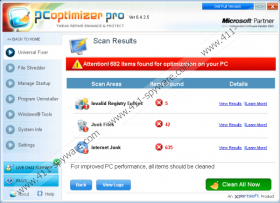