If your browser was taken over by Search.memetab.com, most likely, you downloaded an extension called Meme Generator – MemeTab. This extension, at the time of research, is compatible with Google Chrome only, and it appears that it was built to expose users to the suspicious hijacker. The add-on is currently promoted via the Chrome web store (chrome.google.com/webstore/detail/meme-generator-memetab/ffmpfnfeocophimbkabhamodpfpfhkik), and it appears that it has nearly 1,000 users. That is not a huge number, and, hopefully, it will not rise. The current version of the extension (1.0.2) was last updated in November 2017. The installer was created on the Chrome web store by the developer of the PUP, who is represented via memetab.com. The purpose of the extension is pretty clear – which is to help Chrome users create memes – but that is not all there is. According to our research, you should delete Meme Generator – MemeTab because this extension also works as a tool to collect data and to advertise the offers of third parties.

The interface of search.memetab.com offers the “+Create MEME” button, which allows you to choose or upload any image and then add text to it. That means that Meme Generator – MemeTab actually works. That being said, the first thing you should do after you install the PUP (potentially unwanted program) is not create memes but check the Privacy Policy. Of course, that is something you should do before you install the extension, but it might be too late for that now. The document talks about the collection of data, which means that the PUP records information. Although, at the beginning, the statement indicates that personal information is not recorded, there is a list of reasons why such information is, indeed, collected. It is suggested that research and the improvement of services depends on that. If you choose to ignore that, you cannot ignore the fact that information can be shared with completely unknown parties. According to our research, advertisements and sponsored content could be shown via search.memetab.com, and it is possible that the unknown parties include advertisers but, also, schemers and malware distributors. After all, the search tool represented by Meme Generator – MemeTab redirects to Yahoo Search without permission, and the results can be modified.

Many Chrome users facing Meme Generator – MemeTab are likely to have downloaded the extension via a software bundle that they might have been introduced to via a misleading pop-up with a hidden installer or via an unreliable website. Although we focus on the PUP in this report, ignoring the other threats that might be active can be a huge mistake. Therefore, we advise scanning your operating system immediately. Use a legitimate malware scanner that is up-to-date and is capable of detecting all threats and potentially unwanted programs. Hopefully, the news is good, and you do not need to worry about anything else but the removal of Meme Generator – MemeTab. But what should you do if dangerous malware is found? In this case, you need to focus on this malware because, most likely, it can do worse things than record information. Of course, that does not mean that you should not pay attention to the PUP, and deleting it is, without a doubt, the best idea.

When you remove Meme Generator – MemeTab from your browser, additionally, you should clear the browsing data too because you do not want the cookies that belong to the PUP lingering around. It is not hard to erase the extension and erase the browsing data, but, if you need guidance, follow the instructions below. You also can install anti-malware software if you want to have Meme Generator – MemeTab deleted automatically, and this might be the best idea, especially if the scanner finds other threats that also require elimination. You also cannot forget that anti-malware software is primarily built to protect you against unreliable programs and extensions, and so it is important to install it if you need protection. If you want to discuss anything else, we answer all questions in the comments section.

How to delete Meme Generator – MemeTab

Download Remover for Meme Generator - MemeTab *
*SpyHunter scanner, published on this site, is intended to be used only as a detection tool. To use the removal functionality, you will need to purchase the full version of SpyHunter. 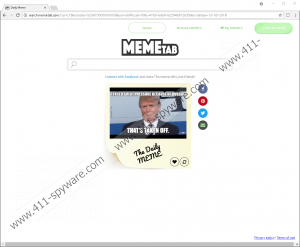