Karatoh is an adware application. It means that it was created to help its developers make money by redirecting users to affiliated websites. When Karatoh redirects to you to an adware-related page, you help it increase the site’s traffic, and, consequently, the people behind this application make money via pay-per-click system. There is hardly anything illegal about that, but you cannot ignore specific computer security issues associated with this application. It is obvious that it is necessary to remove Karatoh from the system if you wish you continue operating your machine safely.

The problem with Karatoh is that it belongs to the SuperWeb family of adware applications. All the previously released programs from this family (including Rad Rater, Key Lime Lizard, Boxed Books, Storimbo, etc.) are known to display annoying commercial advertisements with third-party content. Needless to say, Karatoh is no exception. There would be no problem with these ads if only Karatoh reviewed them. However, adware apps do not bother to check the safety of the third-party content that is embedded in their ads. Consequently, if a malevolent party would insert a corrupted link in one of the ads, Karatoh would not know it.

Some users even think that Karatoh is a malicious infection. However, we cannot really call it that because Karatoh does not enter your system surreptitiously. It is true that the application is not exactly safe, but the point is that users install it on their computers willingly, albeit unwittingly. Such adware apps require user’s permission to get installed. Users GIVE their permission during freeware installation, even if they are not aware of that.

Karatoh is not one of those applications that can be downloaded directly. The main homepage at karatoh.com has no direct download link available. Hence, just like other programs before it, Karatoh obviously gets distributed bundled with freeware. Freeware installers often inform users about additional software that they are going to install on their computers. Unfortunately, users seldom pay attention to all the setup steps. The next you thing you know, you are scrambling to remove Karatoh.

Luckily, it is not complicated to uninstall Karatoh from your system. It is possible to delete the app via Control panel, and this is exactly what we are going to do right now. After manual removal, you should also scan your computer with the SpyHunter free scanner. You clearly have more adware programs on your computer, so you have to get rid of the all in a go.

Do not hesitate to leave us a comment if you have any further questions on how to ensure your system’s security. Remember that one of the best ways to do it is investing in a powerful computer security application.

Download Remover for Karatoh *
*SpyHunter scanner, published on this site, is intended to be used only as a detection tool. To use the removal functionality, you will need to purchase the full version of SpyHunter. 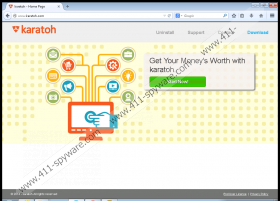