IPA virus, also known as International Police Association virus, is a cunning threat that infects unprotected computers and disables all paths to access programs and files stored on the machine. In addition to the lock-down of the computer, the virus pops up a message containing the name and logo of the International Police Association whose credentials are used to convince computer users that the organization is responsible for the investigation and that the message is real. However, the truth is that his authoritative association does not use such a method for dealing with crimes and criminals; therefore, we affirm that the warning is does not have anything to do with the IPA and recommend that you remove IPA virus without hesitation.

The cunning infection has some versions released in different languages to compromise as many computers as possible, but the content of the messages is the same in every variant. The user is falsely accused of watching and sharing child pornography and unlicensed material, visiting restricted websites and using the computer for other illegal actions. To avoid prosecution and free the computer’s system, a fine of 100 Euros is imposed. This should be ignored even though you think that after paying the ransom the computer will be unlocked. After having paid the fine, the virus will not abandon the computer, and you will have to remove it from the system sooner or later. Moreover, if you have ever come across Ukash and used this service successfully, the fact that its logo is present in the message does not prove the legitimacy of the message; thus, we suggest you remove IPA virus to sort everything out.

The easiest way to terminate the threat is to install a powerful spyware removal application, which will delete IPA virus for you automatically. However, due to the fact this piece of ransomware is able to disable access to the Internet, some obstacles should be overcame in order to download an anti-spyware tool. The following steps will help you to terminate the infection:

Download Remover for IPA virus *
*SpyHunter scanner, published on this site, is intended to be used only as a detection tool. To use the removal functionality, you will need to purchase the full version of SpyHunter. 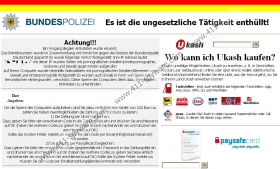