GifaPalooza Toolbar ensures that it can help you view and share gifs, which is the main attraction that is likely to lure users in. At this moment, the toolbar can be downloaded as an extension onto Google Chrome and Mozilla Firefox web browsers or installed as an application for Internet Explorer users. The toolbar is free, and the installation is simple, but you need to think if letting it in is the right move. If you install it, you will have to let in a highly suspicious search tool as well. MyWay search engine might seem harmless, but the fact that you are forced to install it is quite unnerving. IE and Firefox users are even forced to set it up as their homepage, which is very strange. Whether or not you want to delete GifaPalooza Toolbar, our research team recommends reading this report to learn more about it because, at the end of the day, it is not the most transparent piece of software out there.

According to our research, GifaPalooza Toolbar could be offered along with other suspicious pieces of software, in which case, you might let it in with much more serious and pressing threats. Has this happened? Do not rush to say that it has not because some threats can use deceptive disguises or hide from sight. Download a legitimate malware scanner and run it to check if other threats exist. Is GifaPalooza Toolbar a threat as well? To some extent, it could be viewed as a security threat, but it is a potentially unwanted program (PUP). It is possible that it was created only to introduce users to third-party links, as well as the suspicious search.myway.com. After all, users are forced to let this search tool in. This search tool offers a modified version of the Google Search service, but the tool could potentially include third-party links, which automatically makes the service questionable. Is it a good enough reason to delete the PUP? You have to decide that for yourself.

Whether you download GifaPalooza Toolbar using an unfamiliar installer or via gifapalooza.com and chrome.google.com/webstore/detail/gifapalooza/klknlgpmpobhjglggmdfimnpejpbdacn, you will always see the same toolbar. It promotes links to UPLOAD GIFS, MAKE GIFS, MAKE MEMES, Gmail, Yahoo, Facebook, Youtube, Amazon, Macys, Target, TripAdvisor, Walmart, and Instagram pages. The first three route to giphy.com, which is why you can find the “powered by GIPHY” tag on the top-right corner. So, does that mean that you can create gifs and memes using GifaPalooza Toolbar? Not really. This PUP simply adds a link to a website where that is made possible. The interface of the toolbar page also represents the “powered by Google” search engine, and we have already discussed why using it can be risky. Basically, you have to think long and hard if the toolbar serves you in a beneficial manner. Our research team does not think that it is useful or reliable, and that is why the removal of this PUP is discussed.

Since it is installed as an extension, you need to remove GifaPalooza Toolbar from the “about:addons” menu on Mozilla Firefox and the “chrome://extensions/” menu on Google Chrome. Internet Explorer users need to uninstall it via Control Panel. If you have never performed these tasks before, follow the guides below. Generally, removing GifaPalooza Toolbar manually is not that complicated, and you should be able to handle the issue on your own. The situation might be completely different if other threats are found. In this case, you need to quickly check if you can erase malware or PUPs on your own. If you suspect that you cannot, go ahead and use an anti-malware program. It will automatically get rid of all threats found. Note that the creator of this PUP, Mindspark Interactive Network Inc., is responsible for many other PUPS. If you do not want to be dealing with the same kinds of issues, stay away from Metrowhiz Toolbar, AtoZManuals Toolbar, TelevisionAce Toolbar, and many other toolbars alike.

How to delete GifaPalooza Toolbar

Download Remover for GifaPalooza Toolbar *
*SpyHunter scanner, published on this site, is intended to be used only as a detection tool. To use the removal functionality, you will need to purchase the full version of SpyHunter. 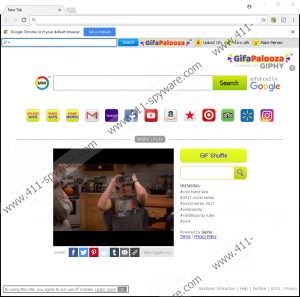