If you’re a Mac OS X user and your Safari browser is blocked with a screen-sized notification saying that you have violated several national French laws, then you are definitely terrorized by Gendarmerie Nationale Mac Os X. It is a ransomware infection similar to Royal Canadian Mounted Police Mac Os X Virus, only that it targets users in Europe and it “speaks” French. Luckily, it is rather easy to remove Gendarmerie Nationale Mac Os X from your browser, because unlike infections that infect Windows OS users, this malicious threat does not get into the computer system itself. Nevertheless, it does not mean it is any less dangerous.

Just like its Windows counterparts, Gendarmerie Nationale Mac Os X terrorizes Mac Os X users by denying access to their Safari browser. It is possible to load the browser, but you cannot browse the Internet, because the only thing you see on your screen is a fake security message supposedly delivered by the National French gendarmerie office, saying that you have been caught carrying out illegal operations and therefore you need to pay a 200 euro fine in order to unlock your browser and avoid possible criminal sentence:

Basically the infection claims that your supposed “actions” are considered to be illegal not only in France, but in the entire European Union, and if you want to avoid prosecution, you need to pay the fine immediately via PaySafeCard or Ukash alternative payment systems. In this case, Gendarmerie Nationale Mac Os X behaves just like a usual Ukash infection, by threatening to report the infected user to the local police office if she/he fails to pay the fine. Some users even fall for this scam, because when they look at the address bar they see the following address: Europol.europe.eu.id657546456-3999456674.i5843.com, and it makes them think that they have really been apprehended by the police forces.

However, there is an easy way to restore your browser access – simply reset Safari and you will be able to delete Gendarmerie Nationale Mac Os X at once. Do not even think of paying the ransom fee! You will only lose your money allowing the cyber criminals behind this scam to reach their aim.

How to reset Safari browser 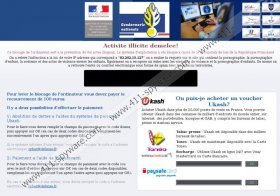