Although browsing the net is interesting and even exciting, it has its risks. Computer infections are threatening PCs all over the world, and if users visit unknown web pages or check insecure sites this puts their machines in great danger. You may become the next victim of Eco Antivirus 2010. This virus is created to target vulnerable computers and penetrate into them. It pretends to be a genuine AV application. The truth is that it cannot ensure the safety of your computer. It is an attacker and it has to be treated as such.

When you click on online ads, sometimes they are able to transfer computer infections to your PC. For that reason, be extremely careful and avoid clicking on suspicious advertisements and offers, such as free online system scans. Eco Antivirus 2010 is often spread via compromised downloads. Although the downloads seem to be just ordinary files, they carry viruses with them. After Eco Antivirus 2010 has managed to penetrate into your computer, it will root itself deep into the system and even create its own files. The infection is also able to contact a remote server and download additional malicious files needed for its deceitful plan. The intruder starts showing fake error messages. Some of the warnings displayed say the following:

System files modification alert!
Some critical system files of your computer were modified by a malicious program. It may cause system instability and data loss. Click here to block unauthorized modifications by removing threats (Recommended).

Internal conflict alert.
Eco AntiVirus detected internal software conflict. Some application tries to get access to system kernel (such behavior is typical to Spyware/Malware). It may cause a crash of your computer. Eco AntiVirus has automatically analyzed your computer for virus and other malware.

The rogueware application will even start a scan of your system and the results will show numerous infected files. Do not believe in any of these tricky messages. Remove Eco Antivirus 2010 and replace it with a reliable security tool.

Download Remover for Eco Antivirus 2010 *
*SpyHunter scanner, published on this site, is intended to be used only as a detection tool. To use the removal functionality, you will need to purchase the full version of SpyHunter. 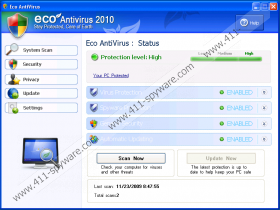