You need to keep CyberSCCP Cryptor Ransomware away because if it invades your operating system, it can corrupt your personal files by encrypting them using a complicated algorithm. Once files are encrypted, not much can be done; unless backups exist. It is extremely important that all users back up their personal files online (cloud storage) or externally (removable drives) because that is the best way to protect them. If your files are backed up, the only thing you need to think about is how you will delete CyberSCCP Cryptor Ransomware. Can you do it manually, or should you employ anti-malware software? That depends on your skills, the version of the ransomware, as well as the overall state of your operating system. If it is beleaguered with malware, removing all threats manually can be an immeasurable burden. Our research team has reviewed the threat, and if you are interested in our findings, keep reading.

As you now know, there are two versions of CyberSCCP Cryptor Ransomware. The first one of them is a file-encryptor, just like Danger Ransomware, Diskdoctor Ransomware, Scarab-Leen Ransomware, and many other threats that our research team has reviewed in the past. This malware spreads using spam emails, and victims are tricked into executing it themselves. Once executed, it obtains an encryption key and corrupts files that users are most likely to classify as personal, such as documents and photos. It is easy to identify which files were corrupted because of the “.CyberSCCP” extension added to their names. “READ_IT.txt” is created by this infection to inform about the situation, and although no specific ransom is demanded, victims are asked to email cyber criminals. Here is the ransom note:

Files have been encrypted by CyberSCCP
Send me some bitcoin or COOOOOOKIEEEEESSS
And I also hate night clubs, desserts, being drunk. send email to me CyberSCCP@protonmail.com

The second version of the malicious CyberSCCP Cryptor Ransomware does not encrypt files, but it can lock the screen to create an illusion that your system was paralyzed. The threat launches a window with a ransom note that is similar to the first one. It also demands victims to contact cyber criminals using the same address, and it also suggests that files were encrypted. Since the screen is locked, victims might be tricked into thinking that their files are actually corrupted. The main difference between the notes of these two CyberSCCP Cryptor Ransomware versions is that this one demands the ransom. It is stated (see below) that only if the victim transfers 0.3 bitcoin to a special wallet (1H76vzhxc7ZytsXW7v4cxje769QanKbyHA), will they be able to obtain a decryption key. The screen can be unlocked by taping keys Alt+F4.

You have been struck with CyberSCCP Cryptor
Your files have been encrypted, in forty-eight hours the key to decrypt your files will be deleted unless you deposit 0.3 BTC into our BTC wallet.

Whether you are hit by a screen-locker or the real file-encryptor, you need to take it seriously. Malicious cyber criminals created CyberSCCP Cryptor Ransomware and, clearly, they are capable of doing some serious damage. If your screen was locked, you can unlock it, but you cannot get out of the situation just as easily if your files were corrupted. Paying a ransom might seem like a good option, but you should not do it because the sum of the ransom is very big and because there are no guarantees that a decryptor would be offered if you complied with all demands. If you trust our experience – which we have had plenty of – you have to understand that you are unlikely to have a fair deal with the creator of CyberSCCP Cryptor Ransomware.

We cannot promise you that you will be able to remove CyberSCCP Cryptor Ransomware manually, but we can promise you that there is a way out of this unfortunate situation. Of course, you might be unable to get your files back, but you can eliminate the threat that has caused it. It is best for you to install an automated anti-malware program because it can easily erase the threat that has invaded your operating system. If multiple threats exist, it can erase all of them simultaneously. It also can ensure protection against file-encryptors, screen-lockers, and all kinds of other infections in the future. Do you want to discuss your options further? If you do, you can start a conversation in the comments section below.

How to delete CyberSCCP Cryptor Ransomware

Download Remover for CyberSCCP Cryptor Ransomware *
*SpyHunter scanner, published on this site, is intended to be used only as a detection tool. To use the removal functionality, you will need to purchase the full version of SpyHunter. 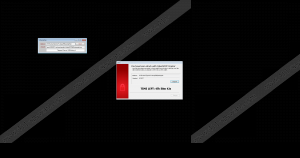