Users often do not understand when or how they install adware on their computers. Such applications as Crimsolite do not seem dangerous or suspicious at all, so they may remain on your computer for a considerable amount of time until you finally realize that it is a potentially unwanted adware application. It is obvious that Crimsolite is not a malicious computer infection, but at the same time it should not be allowed to remain on the system, because such adware applications are often linked to potentially corrupted content. Therefore, the sooner you remove Crimsolite from your computer the better.

The truth is that we have encountered similar computer applications before, and just by looking at Crimsolite’s official homepage at crimsolite.co we can tell that this application is yet another version of Webfuii, Cling Clang, Kasimos and other similar applications. These adware programs often strike as incomplete, because for one you cannot download Crimsolite at the official home page, although the download button is present. Also, quite often the program seems to be unable to connect to the main server to display the commercial ads it promises to display. Therefore, Crimsolite only takes up space on your hard drive without even being useful.

This application is promoted as a useful browser extension that is compatible with Mozilla Firefox, Google Chrome and Internet Explorer. Truth to be told, it can really be installed on your browser, but since there is no official download link available, Crimsolite usually arrives bundled with freeware applications. There are a lot of third party downloaders and installers that Crimsolite can be bundled with, which means that if you do not want additional programs on your computer, it is important that you remain attentive during software installation.

Although Crimsolite may seem more annoying than dangerous, you cannot rule out the possibility that it may display commercial advertisements that contain unknown third party content. As far as computer security is concerned, third party content is always the biggest issue, because malevolent third parties can easily exploit Crimsolite to promote their corrupted content. That is not to say that it is the main purpose of this application, but it cannot be responsible for the third party content it displays.

Hence, you need to take care of your computer security yourself. Start that by removing Crimsolite from your computer. It is very easy to achieve via Control Panel, although after manual removal you should also scan the system with SpyHunter free scanner, because you need to determine which programs this adware has come with and remove them as well. Also, if you need any additional information on Crimsolite’s removal you can also leave a comment in the box below.

Download Remover for Crimsolite *
*SpyHunter scanner, published on this site, is intended to be used only as a detection tool. To use the removal functionality, you will need to purchase the full version of SpyHunter. 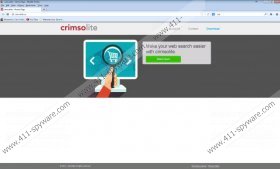 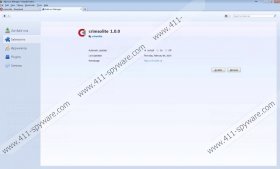