There are many ways for rogues such as Antivirus XP 2008 to arrive at your computer. In this case, the rogue antispyware application is being promoted and advertised via Trojans and other types of malware. In general, such infections can spread via spam email or social engineering. When you receive an email message from an unknown sender that is absolutely random, you should not open an attachment if there is one, or try and click on the link that is embedded on the message. It is very likely that you would end up being infected with Antivirus XP 2008 eventually.

Also, there are a lot of fake security alerts on the websites that you visit on daily basis, so if you click on any of these ads it is also possible to get infected with Antivirus XP 2008. In a nutshell, you would save yourself a lot of trouble by not clicking anywhere. However, even if you apply all the safety measures, rogues like Antivirus XP 2008 can still enter your system, because they don’t need to prompt you about the oncoming infection, and you will become aware of it only when the rogue’s interface pops into your screen.

Actually, Antivirus XP 2008 looks like a legitimate program, because it copies the color scheme and logo of official Windows products. For users who are not very much computer-savvy Antivirus XP 2008 can definitely seem reliable, especially as it launches a full system scan and finds a lot of viruses, giving description, level of threat and status. It says “Alert! Your system is infected!” and then offers to Remove Viruses. Don’t miss the golden tab at the left bottom corner of the interface which “Get Maximal Realtime Protection with Antivirus XP 2008”.

It implies that you would need to pay for the activation or the registration of this program in order to acquire this ultimate real time protection. That is absolutely out of question, because if you pay, you would reveal your credit card number, expiration date and the CVV2 to a third party thus giving a key to your bank account to cyber criminals. Of course, it is understandable that you would want to remove these parasites from your computer that are slowing down your system a great deal, but the truth is that the only thing slowing your computer down is Antivirus XP 2008 itself.

Your problems will be gone if and when your remove Antivirus XP 2008. Acquire a legitimate antimalware tool that will terminate the rogue and will help you to look for other malicious threats in your system, because Antivirus XP 2008 seldom comes alone.

Download Remover for Antivirus XP 2008 *
*SpyHunter scanner, published on this site, is intended to be used only as a detection tool. To use the removal functionality, you will need to purchase the full version of SpyHunter. 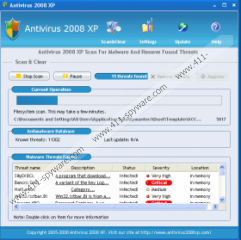