The malicious, deceitful rogue anti-spyware Antivirus Security Pro may take over your unguarded operating Windows system at any moment. If this has happened already you may notice that access to Task Manager and Registry utilities has been removed. You may also notice that when trying to connect to the Internet you are told that your browsers are affected by malware. These symptoms are irritating and highly disruptive because they aggravate both manual and automatic Antivirus Security Pro removal. In order to disable these symptoms you need to delete the rogue anti-spyware, so you face a catch-22 situation. Of course, we can help you delete the clandestine computer infection from the operating Windows system, and all you have to do to learn more about the removal process is continue reading.

The malicious rogue not only paralyzes some programs on your computer, it also floods your screen with various pop-up and on-screen warnings related to your system’s security and removal of supposedly malicious infections which are listed by the rogue’s scanner. Even though these alerts may come from Task Bar you should not think that they are forwarded by Microsoft. Here are a few examples:

Warning! Suspicious activity detected.
To keep the computer safe, the threat must be blocked.

It is clear from the presented notifications that you need to activate the full version of the fictitious security application in order to have malware deleted. Would this happen if you spent $59.99 (30 days Software License), $79.99 (3 months) or $99.99 (6 months) on the allegedly licensed version of the program? Since the anti-spyware program is fictitious even if you pay the money it will not detect and delete authentic computer infections. Of course, the misleading scanner will declare that your PC is now safe to use; however, this is not the truth. According to our researchers, the malicious Antivirus Security Pro often runs alongside malignant PC threats, which means that your system could remain infected even if it does not look like it at first.

The predecessor clones of the rogue AV (e.g. Attentive Antivirus, System Doctor 2014), which have been created by the schemers behind the WinWebSec family, are equally as malicious and require equally as much attention. To remove these clandestine applications from your operating Windows system you may need to employ automatic spyware detection and removal software. Our researchers strongly recommend that you install SpyHunter because it can detect and delete all malignant programs, and it can help you protect Windows security in the future. Whether you want to delete Antivirus Security Pro automatically or manually, you can utilize a special registration code which will disable all existing symptoms and give you a little bit of time to remove existing computer infections.

Download Remover for Antivirus Security Pro *
*SpyHunter scanner, published on this site, is intended to be used only as a detection tool. To use the removal functionality, you will need to purchase the full version of SpyHunter. 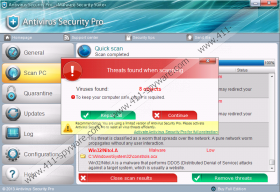 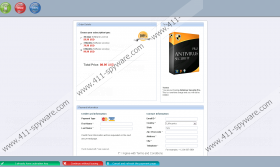 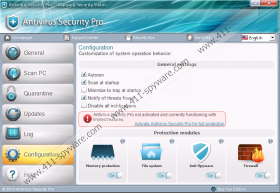