PC owners concerned with their system’s security should never mistake Antivirus Pro 2010 as a legitimate security application. This rogue antispyware application, which derives from the same despicable family of rogueware as PC Antispyware 2010, was designed with devious intentions, and certainly not to be a productive and powerful security tool. In fact, the developers behind Antivirus Pro 2010 are nothing more than unscrupulous cyber criminals out to rip unsuspecting consumers off. This is because Antivirus Pro 2010 is a fake application which only emulates the real working of a genuine security tool, but really has no ability to protect the system against any type of threat or attack.

Antivirus Pro 2010 will enter the system without the user’s authorization, and will hide its presence until such time that it is ready to start its attack against the PC. This will usually be heralded by the rogue initiating a fake system scan which will not only yield bogus scan results but will inform the user that in order to protect his system against these attacks, he will need to pay for the fake software in order to protect his system and get rid of these attacks. Some of the sections Antivirus Pro 2010 will claim to scan and report on include the following:

Of course this rogue does not really scan these sectors of the PC and only emulates the real workings of a genuine security application. As a further attack Antivirus Pro 2010 will spam the user with various falsely generated security alerts generated explicitly to panic the user into thinking his system is under attack.

Other symptoms associated with this rogue include blocked Internet connections and the inability to execute applications. Antivirus Pro 2010 will also promote increased erratic system behavior and extremely poor system performance. This is because the rogue will consume valuable system resources which in turn make it impossible for the system to run optimally.

This rogue will not rest until it successfully rips you off. Limit the damage caused to your PC and destroy Antivirus Pro 2010 immediately. This can best be achieved by making use of a powerful and updated security tool, able to offer adequate future protection.

Download Remover for Antivirus Pro 2010 *
*SpyHunter scanner, published on this site, is intended to be used only as a detection tool. To use the removal functionality, you will need to purchase the full version of SpyHunter. 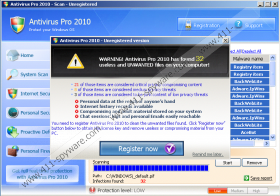