Antivirus Defender 2015 is a rogue antispyware application that employs System Defender’s graphic user interface, used yet by another fake antivirus program called Spyware Defender. The interface looks reliable though, which is probably why unsuspecting computer users may fall for this trap. However, you should not trust Antivirus Defender 2015 not even in the slightest. Remove Antivirus Defender 2015 from your computer ASAP and then run a full system scan to intercept and delete all the malicious files related to this infection. Fake antivirus programs are nothing but dangerous threats designed to steal your money.

This infection may use multiple ways to enter your system. According to our research, while browsing the Internet, you can get a fake pop-up that informs you about multiple threats on your system. Even if you do not click the pop-up, there is a good chance that the Antivirus Defender 2015 installation will be initiated automatically. The installation itself is silent, but, unlike Trojans, rogues are rather explicit when it comes to manifesting themselves, so you will know that you are infected with Antivirus Defender 2015 in no time.

Antivirus Defender 2015 pretends that it is a reliable antispyware application because it needs to convince you that your system is severely infected with dangerous threats. Here's an extract of the information provided at the rogue's official website via avsdefender.com:

With Antivirus Defender 2015, you are absolutely certain that your money is spend on secure anti-virus software! One of the unquestionable benefits of this anti-virus is that regardless of how big your LAN is, it can provide simultaneous protection from viruses for a great number of workstations.

As a rogue application, Antivirus Defender 2015 should run a full system scan that would “find” multiple infections, like Trojans, worms, password stealers, and so on. However, the program does not detect anything even if it does perform the scan. It might fake some malware infection symptoms to make you believe you need to deal with these programs by purchasing the full version of Antivirus Defender 2015. Nevertheless, unlike many rogues out there, this fake antivirus does not block anything, so you can easily access the Internet.

All the fake infection symptoms are there to push you into revealing your credit card credentials on the Antivirus Defender 2015 purchase form. Keep that information to yourself because if the people behind get a hold of your credit card information, you can expect your money to be stolen in no time.

Please follow the instructions below to remove Antivirus Defender 2015 for good. Manual removal is not something we would recommend for ordinary computer users because it might result in system failure. For any further questions on system security, you can always leave us a comment below. Don’t hesitate to do all you can to protect your PC from harm!

How to remove Antivirus Defender 2015

Download Remover for Antivirus Defender 2015 *
*SpyHunter scanner, published on this site, is intended to be used only as a detection tool. To use the removal functionality, you will need to purchase the full version of SpyHunter. 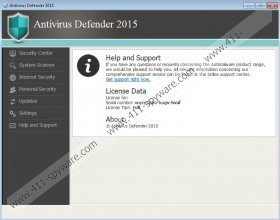 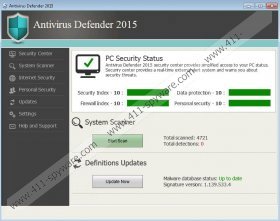 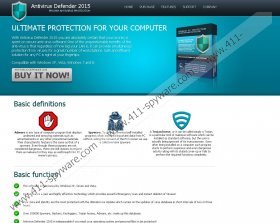