Are you seeing various coupons, deals, and other kinds of advertisements with a label “brought by 123hd-plus”? If so, we have to upset you – it is very likely that an advertising supported application called 123hd-plus has managed to enter the system. It does not seem that you have downloaded and installed this undesirable application yourself because it does not have an official website. Either way, you should not let this program reside on your computer because it will just flood your Internet Explorer, Google Chrome, and Mozilla Firefox with commercial advertisements. It might seem that some of those coupons and deals might really help you to save some money; however, you should still not click on them because you will never know where you will be taken. The security experts of 411-spyware.com advise you to delete 123hd-plus from your system as quickly as possible because it is just a useless piece of software.

Clicking on the advertisements presented to you by 123hd-plus is very risky because this software just uses the third-party service and is definitely not responsible for you safety. It means that you might be taken to different kinds of corrupted websites after clicking on ads. Keep in mind that it is rather difficult to erase malware, which is why we suggest that you ignore all those commercials. Actually, it would be better to delete 123hd-plus entirely because it seems that it not only capable of showing you ads, but also collecting some of the information about your online behavior.

The researchers of 411-spyware.com have found out that 123hd-plus act very similarly as 123HD-Ready, Cinema-Plus, and YourClip-HD. All these programs tend to travel bundled with different kinds of software and enter the system rather secretly. Thus, it can be assumed that 123hd-plus also travels bundled with various free applications, for instance, PDF recorders, various PC optimization tools, and other similar programs. Thus, if you tend to download plenty of the aforementioned applications, you should definitely install a security tool on your system and keep it enabled all the time.

If you have never tried removing undesirable applications yourself, we recommend that you use an automatic antimalware tool to eliminate 123hd-plus from the system. Make sure that you install a reliable tool because those fictitious ones might install much more serious threats onto your computer. If you are interested in our opinion, we believe that SpyHunter is the tool that can be trusted 100%, which is why we definitely recommend acquiring it.

Download Remover for 123hd-plus *
*SpyHunter scanner, published on this site, is intended to be used only as a detection tool. To use the removal functionality, you will need to purchase the full version of SpyHunter. 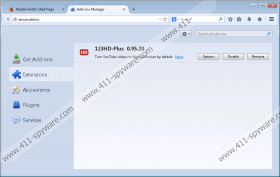 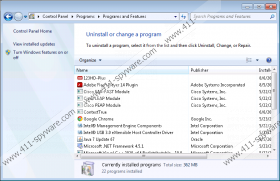