Having a malicious application on a computer is a challenge, because such an infection might affect your computer‘s performance. Windows Expert Series is a fraudulent application which you should not trust. This bogus antivirus software is a means of deceiving Windows users into believing that ultimate protection of the system is guaranteed only when a fake full version of the rogue is activated. However, the truth is that this rogue or its so-called full version cannot remove infections. The malware is a clone of Windows Virus Hunter, Windows Web Commander and other malicious applications do exactly the same as Windows Expert Series. Moreover, all these “tools” are ascribed to the Rogue.VirusDoctor family which consists of malware having identical characteristics. Therefore, if this infection is already on your computer, delete it, or if you have been thinking of trying this malware, do not stop reading because you will learn what it is capable of.

The central aim of the rogue is to persuade you to buy its imaginary full version which supposedly deletes infections. Windows Expert Series applies various scare tactics to make you think that the full version of the malware will remove threats and protect the system. As the malware seeks to scare you, it analyzes all part of the system and presents imaginary infections such as Porn-Tool, Email-Worm, Backdoor, etc. The infections which are presented by the malware usually bear generic names such as just mentioned; however, some names of dangerous infections might be used to scare you into believing that the system is infected. For example, Trojan.Win32.Qhost, Backdoor.Win32.Rbot and other might be used just to make you think that there is no escape but activation of the full version. Please, ignore these bogus infections as well as fake messages which are produced by Windows Expert Series. Some of the bogus notifications are these:

Error
Keylogger activity detected. System information security is at risk. It is recommended to activate protection and run a full system scan.

Error
Software without a digital signature detected. Your system files are at risk. We strongly advise you to activate your protection.
Moreover, the rogue impairs the system so that you cannot remove it easily. First, the Internet connection is lost, and information about the removal of Windows Expert Series becomes unavailable. Second, the malware hides Task Manager and Registry Editor. These two tools are necessary for the removal because the first one shows the processes of the system and the rogue, whereas the second contains registry editors created by the rogue. If you cannot access Registry Editor, you cannot delete the components of the rogue. Those malign registry entries block certain executable files which are normally used to detect infections.

Fortunately, Windows Expert Series can be removed from the system by using the Registry Editor or the Internet to download a removal tool. If you activate the rogue with an activation key which is given for you, bogus notification not allowing you to use the computer properly are disabled, and all the tools discusses are restored.

Another step towards the removal of Windows Expert Series is your decision on the method of the removal. If you are a computer specialist and know how to terminate the infection, you can try to remove Windows Expert Series on your own, but if you an average computer user, it is strongly advisable to delete the infection with an automatic antispyware tool. No damage to the system will be caused, and the system itself will be protected against infection.

Download Remover for Windows Expert Series *
*SpyHunter scanner, published on this site, is intended to be used only as a detection tool. To use the removal functionality, you will need to purchase the full version of SpyHunter. 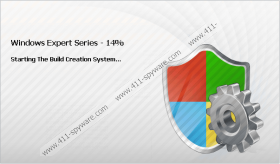 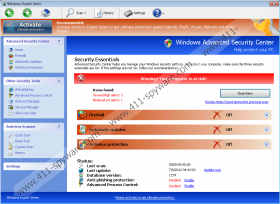 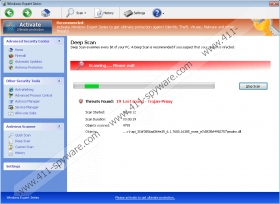