Windows Control Series is the newest clone of Windows Advanced Toolkit, fake antispyware applications, which have been assaulting Windows users all around the world. The fictitious security program, just like its longstanding replicas, brings humongous profits to scheming cyber crooks, and the secret behind such success is the application’s interface. It looks like a legal security application, acts like a protection tool, offers great malware removal services, and is strongly supported by tons of fictitious alerts, pop-ups and other notifications, all deceiving with a supposedly dangerous malware attack.

Windows Control Series computer scanner is the most cunning fake application’s attribute, as it tells complete lies about your system infecting threats, which you are rushed to remove without deliberating it further. None of the Trojans, worms or other alleged programs truly exist, so you should not pay any attention to the fake proclamations and recommendations to remove them with an attractively priced infectious tool’s full version. This product is the main reason why all of the misleading messages and Windows dysfunctions are crated, as only intimidation could lead Windows users into paying money for a removal tool, which is so useless and fake! And if you have already fell for cunning Windows Control Series tricks, rush to inform your bank about this incident, because illegal, deceitful profiting is considered fraud!

If you are one of the Windows users who download programs illegally, and browse carelessly, it is no surprise that Windows Control Series is running in your system! There many security cracks in the virtual space, which allow cyber criminals to slither in infections effortlessly; therefore, to prevent malware from future attacks, you must install legal security tools, which will take care of your system’s protections and, firstly, Windows Control Series removal.

Windows Control Series belongs to the Rogue.VirusDoctor family. This bogus application cannot be trusted for one reason – it aims to get your money and does everything to get it. It supposedly analyzes the system to detect bogus infection such as Virus.Win32.Sality, P2P-Worm.Win32, Trojan.MSIL.Agent and other which you should ignore, because they are not existent in the system. It is inadvisable to attempt to remove them, because instead of deleting malicious files, you might remove files which are necessary for the system to run properly. Moreover, Windows Control Series presents bogus notifications saying that you should activate its full version, because, according to the rogue, it is the only one to remove Trojans, worms or other infections. Learn what notifications you should ignore:

Error
Potential malware detected.
It is recommended to activate protection and perform a thorough system scan to remove the malware.

Error
Software without a digital signature detected. Your system files are at risk. We strongly advise you to activate your protection.

Additionally, you should pay no attention when certain tools stop being responsive. Windows Control Series disables Task Manager, Registry Editor and certain executable files so that it cannot be removed easily. Plus, it limits access to the Internet and you cannot download antimalware software. These additional simulated impairments should not be a major determinant of the purchase of the rogue, because as soon as you delete Windows Control Series, the system again works properly.

To delete Windows Control Series, you should first activate it with the removal key which is given for you below. The activation eases the removal, because bogus notifications are disabled, and tools which were hidden are restored as well as the Internet connection. We recommend you remove Windows Control Series by using an antimalware tool, because this way of removal is the safest. All the elements of the malware are detected and deleted from the system, which ensures that the infection cannot be renewed.

Download Remover for Windows Control Series *
*SpyHunter scanner, published on this site, is intended to be used only as a detection tool. To use the removal functionality, you will need to purchase the full version of SpyHunter. 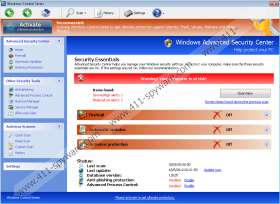 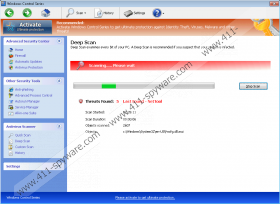 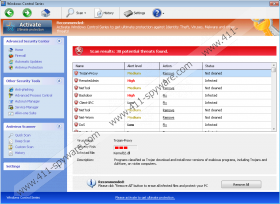