This fraudulent application might get into the system in two ways: it either might get onto the computer through a Trojan or it might be installed by a user. When a Trojan is in the system, it downloads and installs Windows Antivirus Patch without a user’s notice; however, a user might also download a rogue from a faux official website of the rogue and think that he/she has downloaded a legitimate security application.

Windows Antivirus Patch might look realistic, because it pretends to run as a legitimate program; however, it is a bogus application. It runs system’s scans and presents simulated pop-ups and imaginary scan results saying that the system is full of threats such as Trojans, malware or viruses. These threats might be regular files of the system presented as threats to intimidate users, and any attempt to remove those imaginary “threats” is inadvisable, for it might cause serious damage if relevant files are deleted from the system. Moreover, do not think that a bogus full version of Windows Antivirus Patch will help you get rid of those “threats”. Money transfer and disclosure of your banking data is what cyber crooks are waiting for. Please do not trust the content of the simulated notifications or scan results, and do not buy an imaginary full version but get rid of Windows Antivirus Patch at once.

When you know how cyber criminals work, you should remove Windows Antivirus Patch from your computer. Manual disposal of this rogue might be too difficult for you if you are not a skilled computer troubleshooter, because it has to be performed very carefully; i.e., all components of the rouge has to be delete in order to prevent further infections. Our recommendation is to use a legitimate antispyware tool which will detect and remove Windows Antivirus Patch for you automatically.

The rogue tries to avoid the manual removal by disabling Windows Task Manager and Registry Editor. That is to say, it does not allow you to open these tools. Windows Antivirus Patch also blocks your executables, including the Internet browser, and so the automatic rogue removal is also rendered improbable. In the meantime, Windows Antivirus Patch also bombards you with tons of fake security notifications:

Error
Trojan activity detected. System data security is at risk.
It is recommended to activate protection and run a full system scan.

However, you will do yourself a favor if you ignore them point blank, because there is nothing real about Windows Antivirus Patch. The fastest way out of this mayhem is not purchasing the bogus program, but removing it. First of all, you can get your executables and system tools back by making use of this registration code:

After the "registration" Windows Antivirus Patch will behave as though you have really paid for it, saying that all the viruses have been deleted. This is when you need to act fast and acquire a powerful security tool that will destroy Windows Antivirus Patch, at the same time safeguarding your system against similar infections.

Download Remover for Windows Antivirus Patch *
*SpyHunter scanner, published on this site, is intended to be used only as a detection tool. To use the removal functionality, you will need to purchase the full version of SpyHunter. 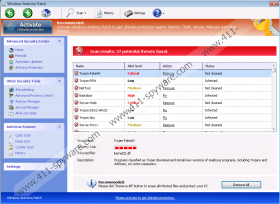 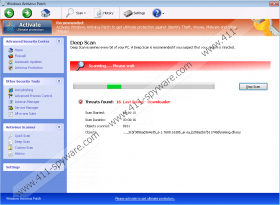 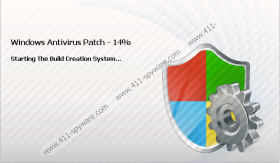